Vanpool To The Rescue 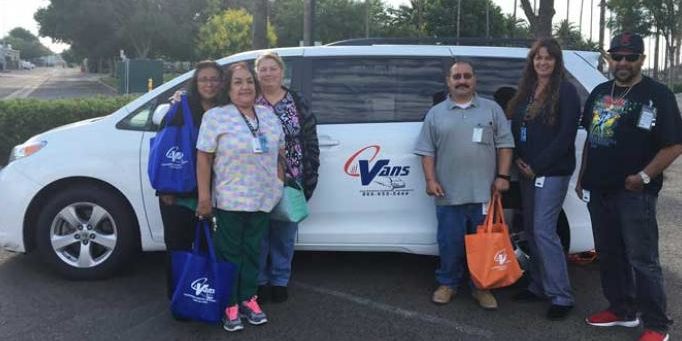 On May 10th we received an email from vanpool 372 it reads “[as we were heading] to Coalinga State Hospital and at or about 7:30 this morning, just as we passed Stratford and turned left onto the CA-41 the van driver noticed a car accident on her side window. She drove back and turns right onto 6th Street…there was a young man sitting beside his wrecked vehicle; it was a singe car accident. Our van driver Frances Hicks and riders Debra Bacarro and Emma Muñoz hurried over to check on him, David Salinas went and turned off the car ignition. Thomas Madrid stood near the main road to await an ambulance. They checked the young man who was dazed and stated that he would not hear out of one ear. I called 911 and reported the incident, the person on the line said the young man had already reported the incident and did not want an ambulance; but I repeated what the psych techs told me, ‘…that it seemed the young man was it shock.’ We drove away from the scene shortly after the fire department arrived at the accident scene. In spite of stopping to assist we arrived to work on time.” Olga Morse who sent us that email was celebrating her birthday that day; she stated “not a bad way to start my birthday!”

The vanpool travels from Porterville, they make a stop in Corcoran to pick up the rest of the vanpool riders and then head to work. The journey starts at 6am in order to get to work by 8am, the miles travelled per week are over 800 miles. It was a good thing that Vanpool 372 was driving by. They have been taking that same route for over 6 years and this has been the first time they encountered an accident like the one described.

After 6 years of ridding together the vanpool has gotten to be close, Olga says, “We’re very close we spend about 3 hours a day in the van, we look out for each other, we never leave anyone at work, and we’re going to wait them out for whatever reason.” The vanpool shares recipes and celebrates important mile stones in their life, you have your family at home and then your work family and your vanpool family, everyone in the vanpool gets along and that is why they work so well together and have been in the same vanpool for such a long time.